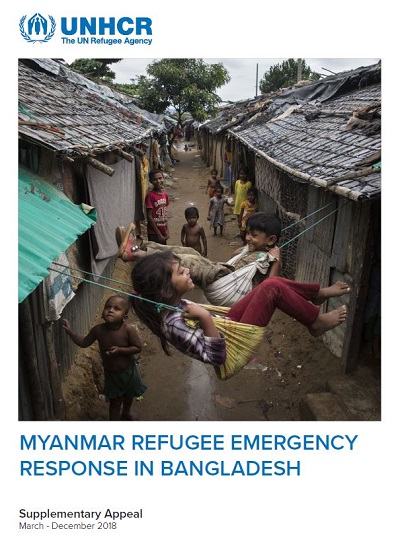 In the fastest growing refugee exodus that the world has witnessed in decades, some 671,000 refugees fled into Bangladesh from Myanmar’s Rakhine State in less than six months starting in August 2017.

The new arrivals joined more than 200,000 refugees from Myanmar already in the country, mainly in the District of Cox's Bazaar, bringing the total to approximately 900,000 With some 602,400 refugees in the Kutupalong-Balukhali site, it is now the largest refugee settlement in the world. The "Rohingya refugee crisis", as it is commonly referred to, has now slowed as compared with the pace and magnitude of 2017. Refugees are, however, still arriving from Myanmar into Bangladesh, some 3,236 in February 2018 alone.

In line with the scenarios on the basis of which the Joint Response Plan has been elaborated, UNHCR's plans and activities to the end of 2018 are based on a total of 1.3 million people who will be in need of humanitarian assistance. This includes approximately 900,000 refugees in Cox’s Bazar; an estimated 80,000 additional refugees who may arrive in Bangladesh during the course of 2018; and some 336,000 people in the host community.

In this Supplementary Appeal, UNHCR outlines its strategy, planning, operational and programmatic activities as part of that response, and for which the total financial requirement amounts to $238 million for 2018.

Read the entire Supplementary Appeal and access the Latest Updates on the Myanmar Situation. A version in Arabic is available through this link.